Inherent in their performance capabilities are some risks, primarily the possibility of exposing items (and people) to extreme temperatures resulting in damage, injury, or combustion. When testing it is obviously important to make sure devices or samples to be tested are not exposed to temperatures outside the intended temperature range.  In cases such as flight or space hardware the cost of disqualified hardware, even if it was only briefly exposed to excessive cooling alone can be enormous.

Several approaches singularly applied or redundantly will reduce the risk of losses.

These systems are known by several names: Thermal Range safety, System Failsafe, Limit Controller, or Latching Thermostat, to name a few.  Some of these systems can be communicated with by automated test systems.

To start with, most modern temperature chambers or thermal platforms offer several levels of protection starting with the temperature controller.  Temperature controllers typically are designed to prevent users from requesting temperatures that would damage the system itself if not strictly the items under test.  Often there are locked limits that are set at the factory to protect the test equipment and additional user limits that can be set to prevent accidental damage to devices under test.  Beyond that many controllers will also go into an ALARM shutdown mode if the attached sensor reads outside the preset range.

The first way that requires thought of additional protection is for excessive or runaway heating. For example, if the output device that switches heaters sticks on, a controller alarm condition may not effectively stop runaway heating. Most systems include some sort of an additional latching thermostat that will shut down any heating when a limit temperature has been exceeded due to system problems, component failure, human error, or other causes.  The latching function keeps the heat from cycling back on if no human intervention in the form of a reset, power down, or other status confirmation has occurred. 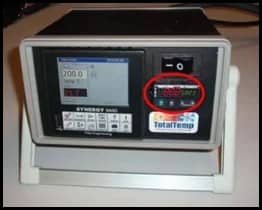 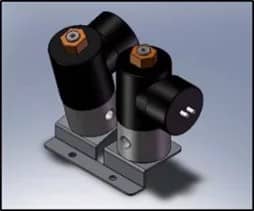 Systems that are air-cooled, or cooled with single-stage refrigeration are less likely to cause damage from runaway cooling conditions but often times protection from excessively cold temperatures are required as well.  If cooling is performed using L-CO2, multiple stage refrigeration, or especially if L-N2 then cooling limit protection is also highly recommended due to the extreme temperatures possible.  Many limit protection systems can respond to both high and low limits in one unit. Protecting from extremely cold temperatures when cooling with L-N2 will often require a little additional planning.  Unlike protecting from high temperatures, removing power from the system for a cold temperature runaway event is not as likely to provide full protection from cold.  The most common example of this would be contamination causing the plunger in the L-N2 valve to stick open.  Killing the power will not likely release the plunger.  For these cases, the addition of a redundant L-N2 valve wired to the limit controller is a good choice, especially if there is a possibility of unattended or overnight testing.  The redundant valve stays energized so it is not receiving the same operational wear and tear as the control valve.

Following this thought, it is also good to look at the possibility of unintended heating due to an active load in the system or even high-velocity chamber blowers which can produce unexpectedly high temperatures. (well over 100C in the chamber is possible due to air friction alone, without the heat turned on!)  In these cases, it is good to ensure that functionality is in place to shut off possible active heat load sources in the chamber including chamber high-velocity blowers.  Keep in mind it works both ways. Blowers running after a shutdown will help cool self-heating products but also cause more heating due to air friction.

It is always a good idea to plan ahead when specifying new thermal test equipment. Existing chambers that don’t already have enough levels of built-in safety can often be retrofitted with integrated safety limit controllers that employ independent temperature sensing and internal system shut down capabilities.  If the addition of internal retrofit limit controls is not feasible, an external limit controller system can be employed to provide required levels of safety.  TotalTemp Technologies offers a variety of safety controls for hot/cold plates or chambers.