How to choose an appropriate temperature sensor for thermal test:

Selection criteria of an appropriate temperature sensor for a given application can be detailed but it often does not need to be that complicated.  Two main points we are going to address today are sensor size and speed of response.  Prior discussions covered thermocouple v. RTD and in the future, we will likely cover more of the environmental issues of temperature sensors such as temperature range and resistance to moisture or other abuse.

Small low mass sensor to screw-mount to the device surface 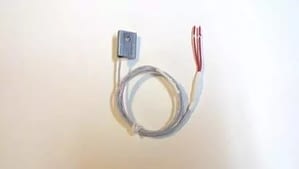 The sensor is typically used to sense Device Under Test. This sensor might be considered Medium-Massive and sensitive on both sides, results will show some smoothing of instantaneous temperature readings and although attached to the device there will be some weighted averaging with air temperature.

Thermocouples are by nature generally smaller, often cheaper, and lower mass but can be ultimately be packaged very much similarly to RTD sensors. Smaller, lower mass sensors will pretty much respond faster. When using a temperature sensor to control, the faster the response, generally the better. Likewise, when just logging a temperature fast response helps.

A slower response can solve or hide some other problems but often is it better to look more at the real problem. An example might be a sensor on a device being temperature conditioned on an uncovered thermal platform. The sensor may be subject to fluctuations in air temperature instead of the intended device.  In this case, a cover is recommended as well as a sensor that is designed to be sensitive on one surface to reduce the possible negative effects of a sensor with a fast response.

Smaller, faster sensors although more fragile are often desired when a device under test is small relative to the sensor and when the temperature of a very specific location is desired instead of a larger package. You don’t want the sensor to be so big that it occurs as a heat sink to the device being monitored.

There are times when some temperature smoothing effects (smoothing over a surface area/volume and overtime) sensed by a more massive sensor is helpful but on the other hand, often modern monitoring/controlling systems can add response smoothing over time through software if averaging is required.  There is generally limited ability to compensate for a slow response.  Smoothing over a volume or surface is likely best monitored with larger or multiple sensors. Often once a device can be thermally modeled/characterized with multiple sensors, a single sensor can provide good test data for ongoing tests.

Many modern temperature instruments offer the ability to read several different types of sensors including RTDs and thermocouples however I have found that often the instruments are more optimized for one range or one type of sensor than another.

We previously indicated our preference for RTDs over thermocouples, we stand by that opinion but there are also some very high-quality thermocouples that remain accurate and repeatable over a range of abusive conditions such as extreme temperatures or rapid ramping rates and vibration.  We additionally generally find that the RTD sensors made of wound platinum wire are more durable than those which are made with platinum wire printed on a substrate.

100 ohm DIN RTD element made of platinum plating on the substrate.

Temperature sensors designed to measure air temperature can be elaborate with fins or special materials to transfer heat from the air but often work best in a simple thin-walled aluminum sheath to protect the sensor from contamination and abuse. A small amount of conductive grease inside helps improve heat transfer from the sheath to the sensor element inside. Likewise, a small amount of thermal grease between the sensor housing and the device under test is helpful.

Some POINTS TO REMEMBER specifying a temperature sensor.

There are a wide variety of temperature sensors available, generally smaller is better for faster response, large enough to make contact with the surface you really want to measure but not so big that there are resulting lags in the readings. Let TotalTemp’s many years of experience help you select the right sensor for measuring the temperature of your device to be tested.