RTD’s v. Thermocouples, which is best?

The question is often asked, “what is the best temperature sensor for my temperature testing or environmental testing application?”

The answers can vary a lot but the two main leaders of the pack are RTDs (Resistance Temperature Detector) followed by Thermocouples.

If you are looking for the short answer of which is best, it is RTD’s but here is a little more to the story

The primary reasons RTD are best:

So why would someone choose a Thermocouple over an RTD?

Arguments in favor of Thermocouples:

Thermocouples generally hold up better in environments of severe vibration or thermal shock.

They typically are better for point sensing instead of sensing a larger area or air temperature. 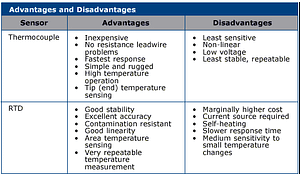 Stepping back a little: There are more tradeoffs, but those are the main considerations. To be fair, there are other viable temperature sensors for many applications but just a short history lesson first. German Physicist Thomas Johann Seebeck first discovered in 1821 that any junction of dissimilar metals will produce an electric potential related to temperature.  Thus the name for a device that senses temperature by the coupling of two metals.  The result was the first electronic temperature sensing device and it could be designed to work without any external power source. A couple of issues about how this sensor works are: 1) The carefully controlled types of metals in the sensor used have to be continued all the way to the instrument that is measuring the temperature. 2) The instrument itself requires an additional thermocouple to be used as a fixed reference.  Since the temperature of the fixed reference usually changes, often an additional RTD or bandgap sensor is used to compensate for the thermocouple calibration.

Thermistors are simply a specific type of RTD, often made with a polymer or cheaper materials than Platinum.  They typically have a narrower temperature range and have less long-term accuracy. Also as a side note, Thermistors most often but not always have a Negative Temperature Coefficient (NTC), meaning that they have less resistance as temperatures get higher.  This feature makes them handy for several special compensation applications, for example canceling out other factors that increase with temperature.

The Bandgap (transistor) Temperature Sensor is one other significant, modern temperature sensor.  This device makes use of the known effect that the forward Base to Emitter voltage of any transistor is directly and predictably affected by temperature.  These devices although rarely used in applications such as temperature chambers are popular because they are inexpensive and can be easily integrated into other silicon circuits making internal component temperature sensing very simple and affordable.  Their usability is primarily limited to the range of -40C to +200C.

RTDs are widely accepted as the preferred temperature sensor for long-term repeatability.  It is my position that they will continue to prevail as “the best quality sensor” however I do hear some interesting reports that there have been recent improvements to the technology of making and reading thermocouples.  I think the jury is still out but I would be interested to hear what experiences others have had with a so-called new generation of thermocouples and available accompanying 24-bit A/D sensing circuits.

As a final note, there are several distinctions between types of thermocouples and likewise different types of RTDs.  The thermocouple type must match the type the instrument is configured to read.  In the same manner, the RTD must match the curve (Typically DIN curve) the controller is configured for.  Additionally, the RTD has a base resistance value that must match controller configuration (typically 100 ohms at 0C)

If you want to know more, just ask.

TotalTemp Technologies offers a selection of 100 and 500 ohm RTDs and thermocouples for thermal platforms and other applications.