Thermal stress we are talking about here is a form of testing applied in the design phase or production of most electronic devices when reliability is important.  It often is combined with other stresses such as power-up, operation at the margins of power, humidity, vibration, etc.

1) in the generic form, Thermal Stress Testing is any testing process that is used to verify the functionality or reliability of a device over a specified temperature range, presumably equal to or slightly more severe than what would be the range of operation expected in the field.  Also, see HALT or HAST testing which can include test-to-failure or quality verification of devices.

2) Thermal Stress Testing also can refer to an especially high rate of change temperature testing.  Used for the purpose of verifying reliability, and functionality over a range of conditions equal to or more severe than what the device would be expected to survive in use.  High rates of change are often associated with testing for the cracking of parts or material bonds. The term thermal shock is used to indicate a rapid rate of temperature change. Test requirements dictate thermal shock tests to simulate actual conditions of operation or tests that are designed to determine at what point stress causes a failure, in some cases well beyond what the product would expect to endure in normal operation.

3) Thermal Stress Testing can also apply specifically to testing where a device has two different temperatures applied.  An example of this kind of testing might be to simulate the conditions of an automobile electronic engine module with a cold-climate startup condition. 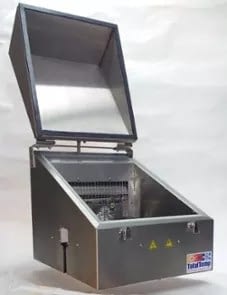 The new HBC144-N Hybrid Benchtop Chamber combines a small benchtop chamber with a 12″ x 12″ thermal platform for performance TotalTemp products, including the new Hybrid Benchtop Chambers are perfect for many types of Thermal Stress Testing.  Our standard thermal platforms can effectively perform rapid/repeated temperature cycling and verify at fast or slow rates as required.

The new Hybrid Benchtop chamber combines the gradient control of a temperature chamber with the speed and accessibility of a thermal platform.  This achieves better performance than either a chamber or platform alone. Hybrid benchtop chambers routinely cut thermal test times in half.

The Hybrid benchtop chamber also is especially capable of applying thermal stress of two different temperatures simultaneously applied to a device under test. For example, you can set the thermal platform to 150C and set the chamber above the platform to -40 to simulate the above-mentioned engine electronics cold-start conditions. Whatever your thermal stress test requirements are, TotalTemp can help you with the equipment to best meet your needs.

In addition to the thermal performance of the HBC144-N, the Synergy Nano Temperature controller has advanced temperature control algorithms that greatly enhance temperature testing speed and accuracy.  Automation features such as logging, remote control, web server, email status messaging, and network printing and can also save time and reduce errors over verification by manual methods.