The Smartphone-based (FLIR-ONE in this case) infrared imager is really useful for displaying very small relative temperature gradients. The Hybrid Benchtop chamber brings to your lab bench performance in the form of convenience, automation, and also thermal performance capabilities that are easily seen with these relatively inexpensive imaging tools. 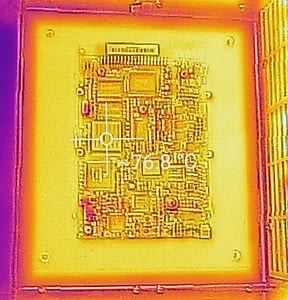 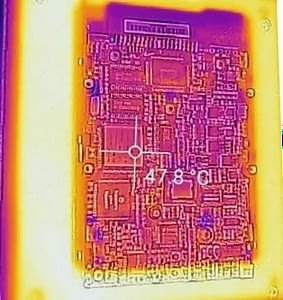 On the left- at 5 minutes in the hybrid benchtop chamber set to 75°C, a thermal image of a computer hard drive as a Device Under Test (DUT) shows very good thermal uniformity.  On the right, the same part on just a thermal platform alone still gets the base of the part to temperature very quickly but shows larger gradients to the surface of this higher profile part given a similar timeframe.

Using just a chamber alone can achieve the same uniformity for this part however due to the limitations of heat transfer by convection, the time required to achieve good uniformity is much longer.  Often twice as long.

The Hybrid benchtop chamber gets parts to temperature faster like a thermal platform while minimizing thermal gradients of the parts like a chamber. The Hybrid design helps the thermal platform along with its many other advantages work effectively with higher profile parts.

Thermal platforms alone are often an optimum solution for a lower profile and active heat-producing parts.

Without the thermal imager in hand, temperatures are easily and automatically measured by the Synergy Nano Temperature controller at several points on the DUT thus confirming the speed and uniformity of the Hybrid Benchtop Chamber. Advanced temperature control algorithms (cascade PID loop) provide good benefits to speed up the process as well.

The Synergy Nano temperature controller controls a profile and logs any thermal testing results to local storage. At the completion of the test, the controller delivers the test results automatically.  It can use email to deliver charts and logs in PDF format directly to a network printer without a PC. This makes the whole process more efficient.

Temperatures can be measured at several points on the DUT to confirm speed and uniformity. Advanced temperature control algorithms (cascade PID loop) can improve the performance as well.