I like to talk on topics relevant to thermal testing however this post is a little break from normal and an opportunity to whine about a common annoyance.  I welcome anyone else who thinks differently or believes I am off base to chime in.

I know polarized power plugs are that way for our safety and I should be grateful but on the other hand, I find them particularly annoying,  especially when going into the supposedly modern flat face receptacles that don’t have the usual ‘funnel shape’ designed to guide the plugin for easier insertion.  The plug on the coffee grinder I start my day with has a habit of going far enough in backward to get stuck but not far enough to work. 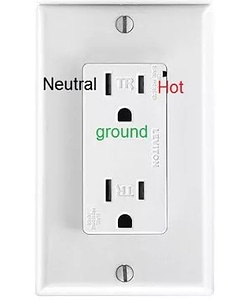 I often think that a three-pronged plug is less annoying because it is pretty clear which way it goes in before you get close, the ground lug is designed to make contact first plus it otherwise genuinely does a better job of increasing safety and ease of mating.

The concept of the polarized plug is pretty simple but far from foolproof. For agreed-upon safety reasons, 120v. wiring in the US and the standard line voltage in many other countries have one leg that is ‘hot’ and the second leg is neutral. The ‘hot’ wire is connected to the very slightly smaller receptacle, (right side). Neutral means that it is connected to the ground at the main circuit panel. You generally can’t get shocked by touching just this wire unless someone has miswired things. Keeping this ‘polarity’ extended internally to the device allows the product to be made somewhat safer.

In this graphic from allaboutcircuits.com, when the switch at the top-right is OFF, the accidental contact would have been safe if the plug polarity had been maintained.

Should the accidental contact happen on the other side of the load (top right) and polarity be correct, there would still be shock hazard but it would be limited to the time that the power switch is ON.  Sometimes manufacturers can look at the product and otherwise predict which wire is more likely to make some accidental contact (motors for example).

Additional safety would be provided if the product case (shown with dashed lines) is connected to the ground with a grounded power cord. The intention of the ground is to cause an external fuse or breaker (not shown) to blow should this ‘accidental contact’ from the circuit to the product case occur. This renders the product unusable until short is cleared.

Safety engineers have agreed that we should have a third wire, not to rely on the proper connection of the other two even though one is connected to the ground already. Under normal conditions, no current would be flowing through a separate ground wire. A nay-sayer like me might argue that there are more opportunities for wiring errors and a grounded product housing might provide another pathway to get shocked if a person touched wiring and the housing at the same time but I am sure that like seatbelts, statistically many more lives and injuries are saved when grounding wiring is used.  Even if not always 100% properly used.  An additional benefit from a third wire is for protection from electrical noise on today’s products that are generally becoming more sensitive to electrical noise.

My position is that manufacturers should do one little inexpensive change to make the product a bit safer before relying on the polarized plug. A double pole power switch would isolate both sides of the circuit should ‘accidental contact’ occur anywhere downstream from the switches (when OFF). When the switch is ON, some equally reduced risk of shock still exists in either case.  The level of safety is the same with a double pole switch as provided by the properly connected polarized plug when the switch is ON.

I am also in favor of additional use of technology that is pretty much commonplace and better refined today. This is the Ground fault interrupter or GFI receptacle/circuit. These circuits are now more reliable and fit into the electrical box inside the power receptacle. The theory is that if the sensors in the GFI since even a very small difference in current measured on one leg to that of the other, they will immediately interrupt the circuit. If the currents are not the exactly same, the presumption is the current is somehow going through a ground fault which may be through a human body. GFI circuits provide safety regardless is the switch is on or off and generally are the only disruption to life when there is definitely a problem. Nothing could go wrong, right?

Well generally that is the expected result without too much deviation and I would say that for the cost, higher risk areas, receptacles should be protected with GFI devices, especially in labs, kitchens, garages and where things get worked on and other risks such as water or pipes (grounding) exist. I say instead of polarized plugs, all devices should employ switches on both the hot and the neutral in the event that a plug or wiring is somehow backward, or something else unexpected goes wrong. Get rid of the polarized plug. What say ye?