Testing at extreme temperatures requires considering several options. Testing at hot temperatures has its issues, however, testing at ultracold temperatures – below -40 C in most cases requires the use of expensive and sometimes failure-prone cascade refrigeration systems or alternately applying expendable cryogenic fluids such as liquid nitrogen or liquid CO2.

High-performance cooling is often more of a challenge than heating and also tends to be the least understood process.  The high initial cost is a well-known roadblock to acquiring the best equipment to do the job. Often the unknown or under-reported cost of running a refrigeration system, electricity, maintenance plus possible downtime also require consideration. When thinking of expendable coolant solutions, facilities managers often have some pushback to pressurized liquid Nitrogen or other cryogenic fluids.  Cryogenic fluid distribution systems can be another convenient and safer alternative to large tanks. Unless there are consistent and large-scale uses they are often not warranted due to the extreme installation costs. 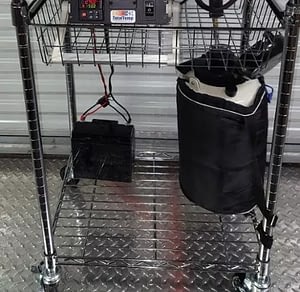 Another often overlooked option for testing at extremely cold temperatures is a low-pressure Liquid Nitrogen system. I am referring to is a small portable low-pressure LN2 tank. For example, if you have a 20-liter portable tank you can carry the tank easily by yourself or transport it on a light-duty cart. It will store (with some loss) for well over a month, and best of all you can hold a thermal platform at any other similarly efficient (if it is such) thermal testing system at -50C for hours or ramp to -50C several times without refilling or swapping tanks.   Doctor’s offices often use small portable LN2 tanks with just enough pressure to make the Nitrogen come out of a nozzle.  Similar systems can be used to provide cryogenic cooling to small chambers or thermal platforms.  Sometimes these systems can safely have their pressures boosted by a small amount to achieve really good performance.

Contact us if we can help with any concerns you may have about cryogenic cooling for environmental testing.